Forum Post / Reply
You must log in before you can post or reply to messages.
2015 Captiva 2.4L ecotec random misfire
Friday, January 11, 2019 11:52 AM
Jesse Parnell
I recently posted this issue on the Chevy forums and received virtually no help.
Note: The Chevy Captiva is the same platform as the 2015 Ecotec, and Terrain.

I also attempted to make this post a moment ago, and my session timed out... after logging back in, all that I typed was deleted, so bear with me...

Without getting too much into detail, my Captiva is at about 67k miles, and the issue began right at about 50k miles. I bought my Captiva less than a year ago with 45k miles, and it has been a problem ever since. Replaced so far: Battery, belt tensioner, belt, Cyl #1 Coil, Spark plugs, Bank 1 O2 Sensor, Exhaust manifold (old O2 sensor was seized solid). Codes thrown so far: P0301 and P0132A.

Misfire typically happens on idle, and driving up a hill slowly. Misfire seems to be more noticeable while running regular gasoline (any grade), but when a misfire happens, it seems to be less severe while running e85. I do not believe this is a fuel related issue, the misfire happens with any fuel (flex fuel). The misfire does however seem to be most severe while in cold weather (less than 55*F).

At the moment, everything seems to be reporting correctly in Torque Pro, STFT (Short Term Fuel Trim), and LTFT (Long Term Fuel Trim). I do seem to have a chatter at 4500 RPM while accelerating near WOT, but I have never pushed the engine harder. It doesn't quite sound like an ignition "ping," or "knock," however I could be wrong. I am worried it could be a timing chain issue, however, I do not know if the symptoms match.

The only thing that proves what I am experiencing is legitimate are misfire counts, which I was able to pull last night... 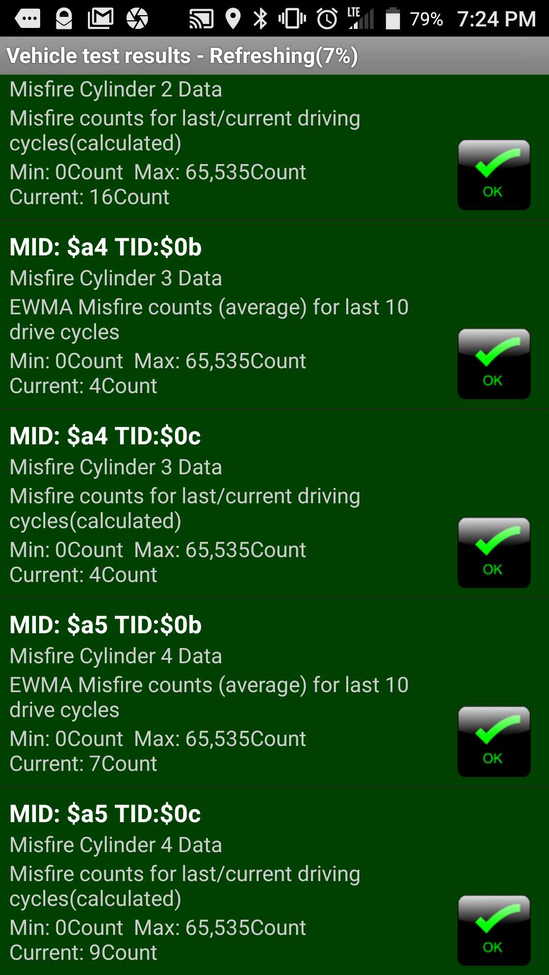